Having switched to Android SDK development over the past year, I’ve run into quite a few interesting and unexpected challenges. So how does library development differ from app development?

This mini-series will cover the differences between SDK and App development, and explore some interesting challenges around SDK modularization and transitive dependencies.

This blog post is part of a series on Android libraries:

Before kicking off the meat of this series, let’s have a quick look at how SDK development differs from app development. If you’re already familiar with these concepts, feel free to skip to the next article!

Note that the term SDK or Android library will be used interchangeably.

Anatomy of a library

A getting started Android SDK project typically contain of at least two modules: 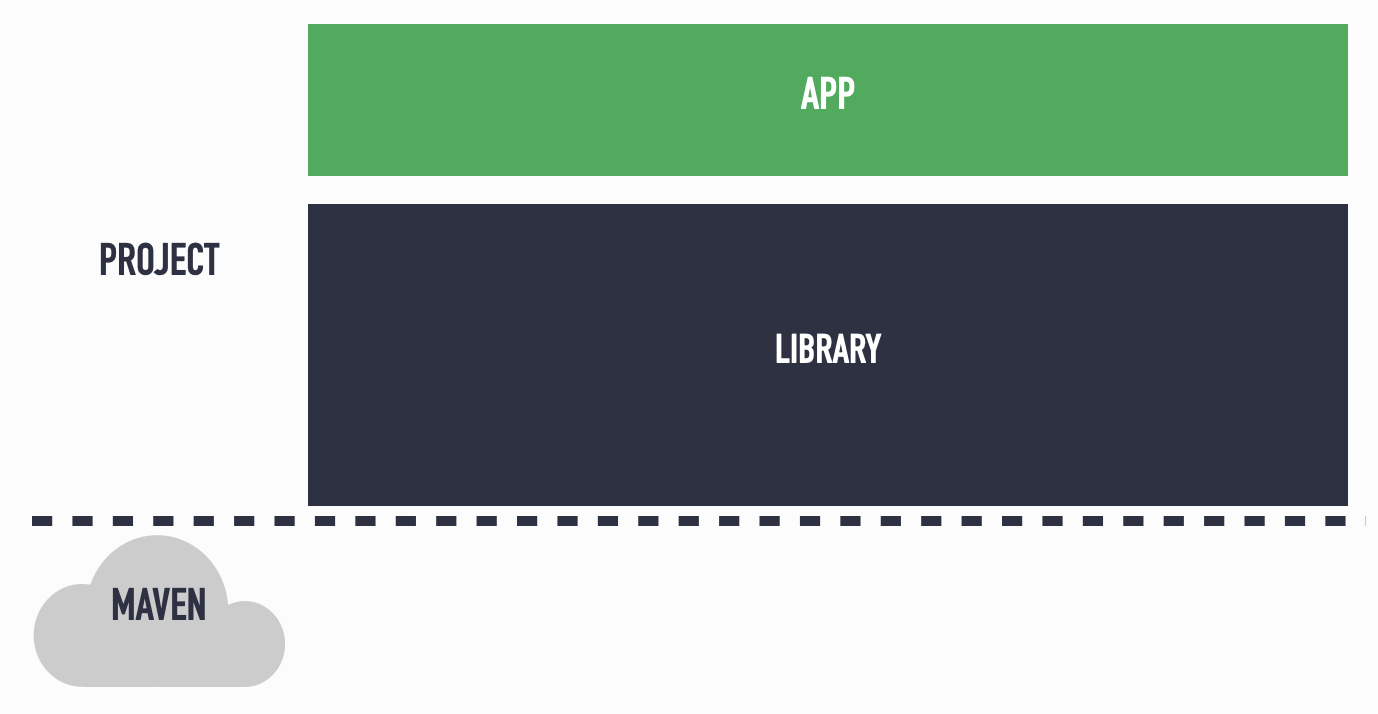 In this, the app module has a direct dependency on the library module:

The library module has the com.android.library plugin in its build.gradle file:

Notice how everything so far is exactly the same as developing a submodule in a multi-module app!

Similar to building the application, the library can be built using a Gradle task:

However, the output won’t be an .apk file (or .aab when using App Bundles). Instead it will be an Android Archive (or .aar) file, placed in the build folder of the library project:

This .aar file is very similar to a Java Archive (.jar) file, but it can also contain Android XML resources.

Note that .aar files aren’t signed, so in contrast to creating an .apk file, no signing config is required to create the release variant of the Android library.

However, customers shouldn’t directly copy-paste the SDK source code into their project. Instead, they should consume the library as a Maven dependency:

Resulting in the following project setup: 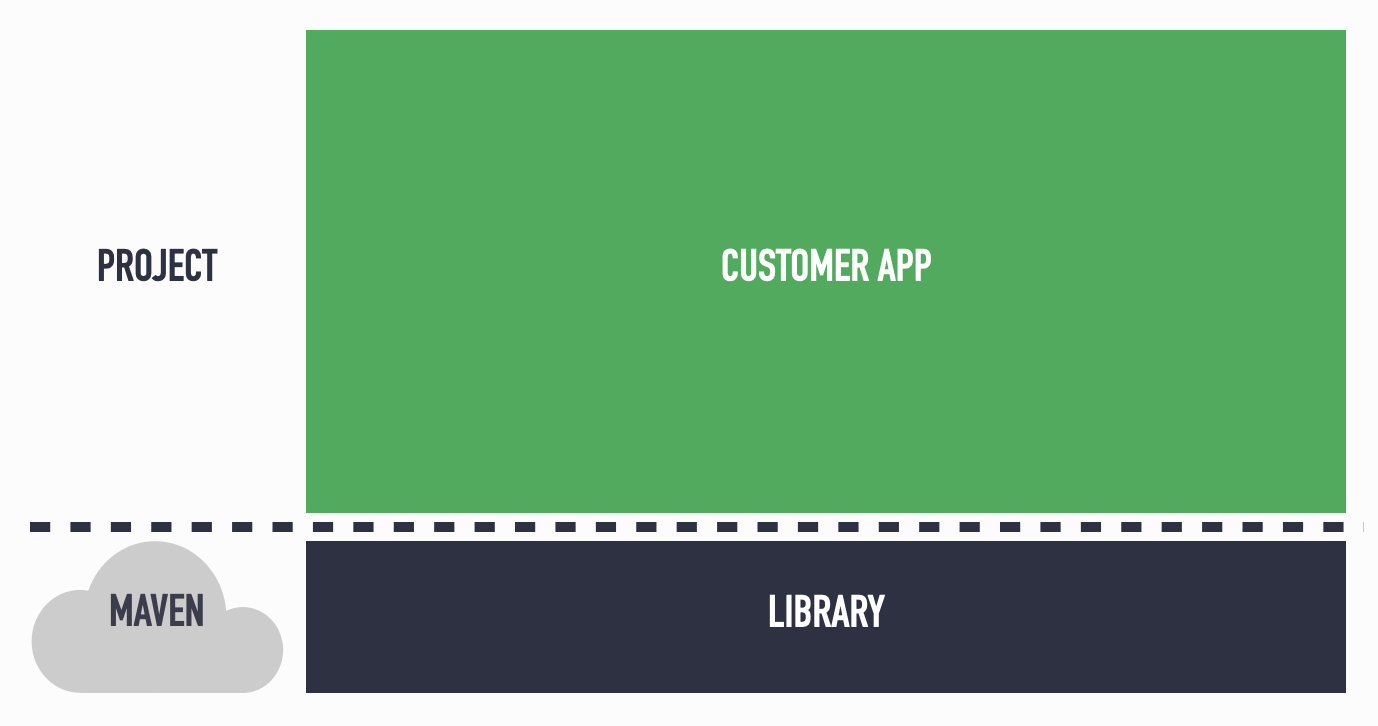 To make this possible, the library needs to be deployed to a public Maven repository such Maven Central or Bintray (jcenter). Which can be done by configuring the Gradle publishing plugin.

This blog post won’t cover how to publish your library, instead have a look at this great article by Andrew Kelly if you’re looking to learn.

But as the library evolves, it might also start depending on Maven dependencies of its own! Imagine that the library would also depend on OkHttp:

This means that the customer application needs to depend on both library and OkHttp: 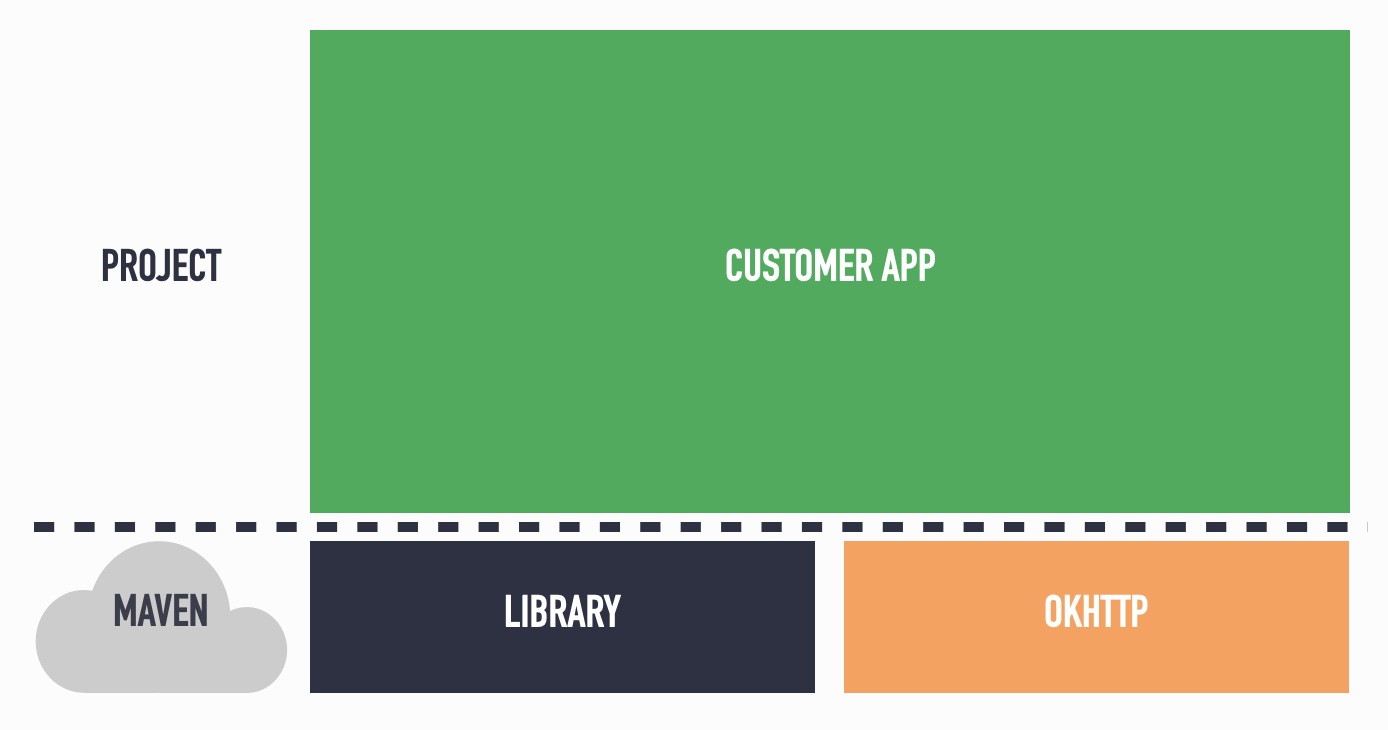 Because .aar files only contain code and resources of the library module that was used to build it! So the .aar file of the library won’t contain any OkHttp code, nor any indication that it requires OkHttp to run.

Consequently, customer applications need to include both the library and OkHttp as a dependency.

Notice that this did work when library is a submodule of a project! Then the build.gradle file of the library includes the OkHttp dependency and Gradle will include it into the .apk while building.

Wouldn’t it be nice if the OkHttp dependency could be automatically included in the customer application?

That way customers simply have to add:

But how can Gradle know to include OkHttp in the customer app after adding the library as a dependency?

That’s taken care of by the pom.xml file that gets created when you deploy your app to a Maven repository (such a Maven Central).

Here’s an example pom.xml for the library:

So when building an Android library, there are two key outputs:

In reality, there can be many more files (Javadoc, sources,…). Have a look at the Files tab of the Maven entry for OkHttp.

For more information on how to generate a pom.xml, have a look at this post by Marco Gomiero.

Finally, for Android libraries with external dependencies, there will be a difference between a local build of the SDK or a Maven build.

If the SDK source code is within a project, then transitive dependencies will automatically be included when the application is built.

However, when the SDK is included through Maven, those transitive dependencies will only be included when the pom.xml file is properly constructed and deployed to Maven.

Therefore it is always important to test the actual SDK artifact as a Maven dependency before shipping a new release!

Android libraries are built into a special .aar format that includes all code and resources. For all its external dependencies, a pom.xml needs to be deployed alongside to the Maven repository.